Inspired by coffee culture and so much more!

Starting a business in Ecuador is generally a challenging process for foreigners but many have succeeded.

San Sebas Café was inspired by the coffee culture of Austin, Texas. Lindsay Burton thought a good café would be great for Cuenca’s huge number of university students to hang out, read and study. It turned out that her dream appealed to much larger population including both Ecuadorians living in Cuenca and also, without a doubt, the growing Cuenca expat world.

Though the vision was for coffee and drinks, Lindsay soon realized that interesting food options were also much in demand. Soon the menu expanded and even a second floor was added to handle her growing clientele.

Lindsay grew up all over the world, including the Philippines, Japan, New Zealand, Belize and a stint in Cambodia. As an adult, she quickly worked her way up in some of Austin’s most iconic restaurants and also helped set up a number of them as well.

Lindsay’s parents were active in Quito and Cuenca from 2008 onwards working with medical NGOs and before long Lindsay came to visit. She liked what she saw from the very start! 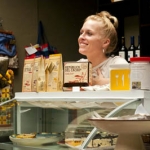 Falling in love with the charms of Cuenca, Lindsay moved here in 2010 after packing up her life in Texas.

It took her roughly nine months to find what she was looking for and then many months of fixing up the building she rented on the southwest corner of Parque San Sebastian. Her Spanish improved rapidly from all the conversations she had with contractors, lawyers and municipal agencies. Getting her place to where it is now was not easy but she never gave up!

At that time, Parque San Sebastian had a bit of a rough feel: it was dirty and frequented by a down-and-out crowd of various ages. But Lindsay quickly figured out how to improve the environment around her new café: she started giving the police on patrol free coffee. This resulted in a much higher police presence and soon the area became cleaner and safer and, more importantly, other business began to see the potential . . .

The clientele at San Sebas Café are mostly locals but it is also a well-known meeting place for foreign residents. The attraction for all her regulars is the atmosphere and the eclectic menu options (many not be found anywhere else in the city). For example, they offer Kombucha mushroom tea and delicious Thai and Mexican-style quinoa and fresh veggie bowls. Many of the dishes on the menu were inspired by the places the family lived in all over the planet.

Lindsay has an excellent team and the service is impeccable. When you walk in you immediately feel that the San Sebas Café staff work together like a family.

Recently, Lindsay’s brother Adam has come down to join the family. While Lindsay focuses on the kitchen, Adam handles accounting, advertising and social media. 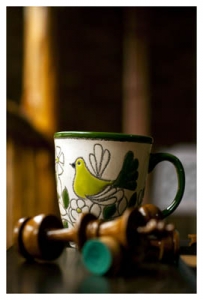 San Sebas serves breakfast (bagels, pancakes, eggs, French toast, yogurt, bacon, sausages) and lunch throughout the day: everything from big burgers, wraps and sandwiches to salads, soups and sweets of all kinds (think rich cheesecakes, brownies and thick cookies). Seating is both indoor and outdoor. A wide selection of art and craft products are also sold here.

Next time you are looking for a great place to enjoy the local wonders of Cuenca, head over to San Sebas. You can’t go wrong!

San Sebas Café is open from Wednesday to Sunday from 8:30 to 15:00; closed Mondays and Tuesdays (except for special events). It is located across from the Modern Museum of Art on Sucre, just west of Colonel Talbot.